Before starting, you should be aware that the term 'image' has two different meanings in UEFI. First, it refers to executables (EXE), such as drivers and applications, that get loaded into memory by the LoadImage() and StartImage() services. Second, it refers to rectangular, full-color images.

Support for these images started with the UEFI 2.0 specification, with the EFI_GRAPHICS_OUTPUT_PROTOCOL. This protocol provide device-independent services for moving bitmapped images back and forth from a video device. But, it provided no standard means for finding and managing these images.

Then the UEFI 2.1 specification introduced the HII Database. Each driver can install pre-packaged images into the database. Then the driver can manipulate or display them using the EFI_HII_IMAGE_PROTOCOL. 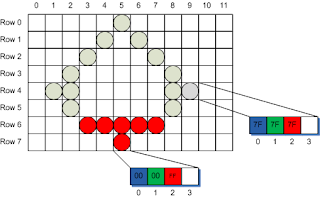 Image Services
The UEFI HII Image protocol provides two classes of services:
Conclusion
Images are slowly being integrated into firmware as an integral part, simply because of user expectations and a desire for OEMs to stand out in a crowd. UEFI 2.1 provides built-in support for basic image manipulation services. UEFI 2.3 also added support for animations. In our next article, we will look at how UEFI stores different types of images in the HII packages.
Posted by Tim Lewis at 4:28 PM No comments:

Ok, now into the gory details of how font packages are encoded. In many ways, font packages are like string packages except, instead of strings, we are talking about font glyphs. There is a font header, followed by font information and then a series of font blocks.

The glyph blocks represent the glyphs in sorted order, starting with the glyph for character value 0x0001 and incrementing from there. Each glyph block increments the character value by either 1 or N. There are five basic types of glyph blocks:
The actual glyph data is packed with one bit per pixel of the glyph, but rows are rounded up to the nearest byte (8 pixel) boundary. For example, consider the letter 'A'. 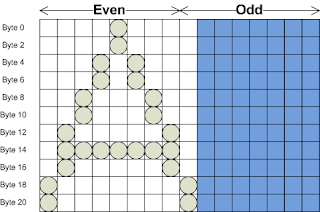 In this case, the actual glyph data is 9 pixels wide and 11 pixels high. If optimally packed, this would lead to a storage size of 99 bits or 13 bytes (12 with 3 bits left over). However, when this was being discussed, some preliminary implementation data suggested that the glyphs were much easier to handle if each row was byte aligned (the blue shaded area in the diagram). Then, after testing with compression software (since we assumed that the fonts would be stored compressed) that the bit-packed data actually was larger after compression than the byte-packed data.
Conclusion
This wraps up the second on fonts. Next week, we'll dive into how HII stores and handles images.
Posted by Tim Lewis at 11:33 PM No comments:

Just a quick plug to note that a book co-authored by myself and three Intel engineers (Mike Rothman, Bob Hale and Vincent Zimmer) is finally available for sale via Amazon or through Intel Press. UPS says that my personal copy arrives next Wednesday. Yeah!
Posted by Tim Lewis at 8:29 PM No comments:

The UEFI Specification provids services and storage for manipulating bitmap fonts as part of the Human Interface Infrastructure (HII). Last week, we looked at the Simple Font, which describes a means of storing a fixed-width font for Unicode character values. Each character in the Simple Font is either in an 8 x 19 (narrow) pixel or 16 x 19 (wide) pixel character cell.

Proportional fonts extend bitmapped font support in several significant ways:
Fonts
So, for UEFI, a font is a logical grouping of glyphs identified by a name, a size and a style.
Glyphs
The glyph is the image representation of the character, with each dot in the image represented by a single bit, on or off. The off pixels are either not drawn (for transparent drawing) or else drawn in the background color. The on pixels are drawn in the foreground color. For example, for the letter A, it might look like this: 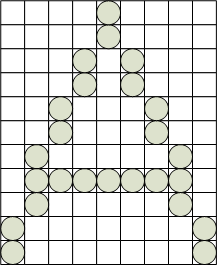 But this isn't enough information to draw the glyph. For one thing, we don't know how much space to leave between this glyph and other glyphs that we have drawn. This is one of the key differences between this font and the simple font in the previous articles. Simple fonts have the empty space above, below, before and after the character image built into the glyph. Proportional fonts track this sort of information separately, using three key ideas:
Character Cell 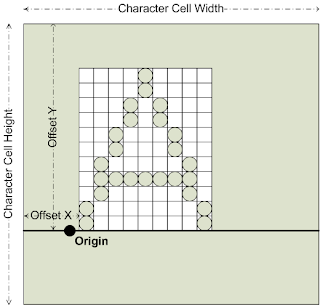 Baseline
The baseline (or Offset Y) allows UEFI firmware to draw text from different fonts on the same line and still have everything line up correctly. The baseline is calculated as the number of pixels above the Origin of the tallest character image.

In this picture, the baseline is the height of the tallest character (A). Notice that the character 'q' starts 3 pixels below the baseline, while both the 'A' and 'x' start on the baseline and the quotation mark (") starts 8 pixels above the baseline. The gap between the Origin and the left-most pixel of the glyph is known as Offset X. For the 'A' and 'q' and quotation mark, this is 1 pixel. For the 'x', this is 0 pixels.
Character Advance
The character advance is the number of pixels to move the Origin to the right. The character advance determines how much whitespace to put to the left and right of the glyph.
Conclusion
All of these details about offsets and baselines, advances and cells may seem intimidating, especially in a firmware environment. Many basic tasks become a lot more difficult when using proportional fonts: drawing text, editing a string or selecting text (with a mouse!). Fortunately, the EFI_HII_FONT_PROTOCOL provides functions which not only draw a string to a buffer or to the screen, but also report back information about the width and height of each character drawn. We will investigate these in more detail later.
Next week we will return to how the fonts are encoded.
Posted by Tim Lewis at 8:25 PM No comments: