This is the second article in a series describing a simple UEFI Shell game that generates a random maze and lets you navigate a character through that maze to the exit. The goal is to show how to use graphics and the UEFI Shell together, line by line.

The next step is to initialize the grid and the maze. The maze uses two-by-two sections of the grid. These sections can have one of the following configurations

This UEFI Shell application features a very simple maze game that uses UEFI’s Graphics Output protocol to draw a random maze and direct a character from entrance to exit using a keyboard. It will be added to the SVN repository after the last article in this series is published. 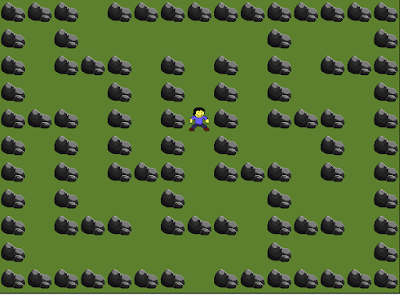 This game doesn’t have any villains or time limits, yet. Originally, I planned to integrate the thermometer application previously discussed so that the main character got hotter and hotter and little ice cubs in the maze would cool him down. You can add villains in the maze, or the animation could move smoothly from cell to cell or there could be some sort of time limit.

The source is spread over two .C files. It also uses three bitmap files, which are included in the online source code. These bitmaps are: a rock, a player, and a solid green background.

These are the include files for the standard C library, basic UEFI services and, surprise(!) bitmaps. The MdePkg\Include\IndustryStandard contains constants, data structures and file formats from many popular industry standards, including PCI, ACPI and USB.

These are the key function declarations from the other source file, Bitmap.c. Rather than create a separate header file, they are just listed here.