Prior to to UEFI 2.10, there was only one graphics display mode: 800 x 600 x 32-bit color depth. Those numbers still show up as a required mode for external plug-in graphics adapters. But what if you want to draw text on those graphical displays? Where does the font come from? How big is it? Does the font really hold all 40K+ characters from the Unicode specification?

According to the EFI (and then UEFI), the system firmware was required to carry the ISO Latin-1 charcters (essentially characters U-0020 through U-00FF in the Unicode specification) as well as the line drawing characters. But that still leaves the question: how big are the bitmaps (or glyphs) in the font?

For a long time, prior to the UEFI 2.10 specification, the answer was 8 pixels wide and 19 pixels high. With a little math, you find that this works perfectly to put 80 columns and 25 rows of text on a 640 x 480 pixel display. That number of pixels, in turn, happens to be the highest resolution that could be produced by a standard VGA adapter. However, a character cell of 8 x 19 is not large enough to hold many of the glyphs found in other scripts, most notably Chinese, Japanese and Korean. So, in addition to the narrow 8 x 19 pixel character cells, a wide 16 x 19 pixel character cell was also supported.

One of the design goals for HII, back when UEFI 2.10 was being crafted, was the support for bitmapped, proportional fonts. But rather than throw away the previous way that font glyph encoding, the previous method was added as another package type: Simple Fonts (type 0x07). 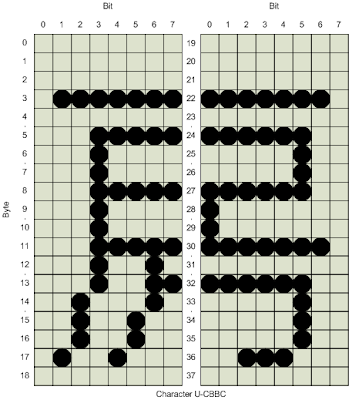 The Attributes indicate whether the glyph is narrow or wide and whether the character value is non-spacing. Normally, after drawing a character, the position of the next character would be directly to the right. For non-spacing characters, the next character would be drawn in exactly the same character cell. This allows, for example, the ` or ~ character to act as combining diacritical marks so that, when printed prior to an a or n, would display as á or ñ.
Each of the wide glyphs has a small header followed by the encoded glyph data:

Multiple Language Support
Let's say I'm designing a plug-in card and I want to support Chinese. But I don't know whether or not the system firmware in the platform where my card is installed supports all the Chinese characters (glyphs) that I need. What can I do? Well, with UEFI 2.10, your driver can just carry the characters you need that are in addition to those provided by the ISO Latin-1 characters that the platform is required to carry in its firmware. The HII Database will automatically combine glyphs from fonts which have the same font family, size and style.
Using The Simple Font
The simple font can be accessed, like all other fonts, through the HII Font protocol. The simple font has the name 'system' and has a height of 19 pixels.

Ok, a little promotion for the book I co-wrote, which is finally for sale. We finished writing it over 6 months ago. Not that most of you are going to run out and write UEFI Shell apps. But if you were...


http://www.intel.com/intelpress/sum_eshl.htm
Posted by Tim Lewis at 2:29 PM No comments: